Some things I’ve learned in 43 Years of Javelin Throwing

Posted on August 29, 2015 by Bradstock and Bradstock

Ten years ago I wrote an article for American Track and Field magazine titled “Some Things I’ve Learned in 33 Year of Javelin Throwing”. Since I initially wrote this piece I have broken the World Masters Record half a dozen times and competed in two more Olympic Trials for a total of 8 times without a single surgery so I figured it was time to re-post and just add 10 years to the title. 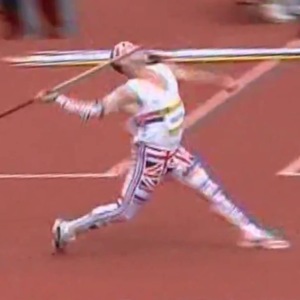 Here are the 10 most important things I’ve learned in the past 43 years of throwing:

You throw a javelin with your entire body, literally from your toes to your fingertips..

What to do: Spend half an hour every day doing basic fitness exercises.

Throughout the entire year have your throwers run, bike and swim – half an hour a day, 6 days per week in addition to anything else they are doing.

During the conditioning phase the half hour can be increased in its intensity and have your athlete run more (3 run / 2 bike / 1 swim).

After the season, during the summer months, keep active and add other fun activities: hiking, rollerblading, rock climbing, surfing.

Whether you are going to throw, lift weights or stretch, you must prepare your body for the workout.

What to do: Before every workout or competition, take an easy 10- minute jog or bike (stationary), followed by 10 minutes of flexibility exercises. Stretch the calf muscles, hamstrings, adductors, hip flexors, lower back, chest and shoulders. Hold each position for at least 30 seconds, to a point where you feel a good stretch — and never, never bounce! Afterwards, cool down with a 5-minute jog and stretches for lower back, hamstring and calf muscles. On days the thrower lifts weights, add triceps and lower abdominal stretches.

There are two essential things to do:

(1) The first is to improve the thrower’s flexibility.

Here are some guidelines:

Warm up well. Put heat lotion/balm on specific target areas, especially lower back, hamstrings and shoulders, and keep enough clothing on to stay warm even in the summer time. Each stretch should be held for at least a minute to 90 seconds if not more. Push the stretch to discomfort, not pain, and hold and breath and try and relax into the stretch. As the muscle relaxes and the discomfort subsides increase the stretch even more. The only time of the year not to really overdo the intense stretching is during the heavy lifting phase. The rest of the year, push your throwers to become incredible, flexible throwing machines.

(2) At the same time the flexibility is being improved, increasing the throwing range of motion must be worked on. This is done by working on technique when throwing a javelin, weighted balls and medicine balls. Focus on trying to have as long a pull as possible: reach back as far as you can, forward – as you throw- as far as you can, and chase after the implement as you release it.

Improving flexibility and increasing the throwing range of motion will greatly improve your athletes’ ability to exert greater force on the implement, especially as their strength improves.

What to do: (The reps and sets for the exercises do not include warm-up or cool-down sets).

*Always use lifting straps. It will allow your athlete to do more weight and complete more repetitions. Also, it will help keep the forearms from becoming over developed (from gripping). This is one body part a javelin thrower does not want to build up as it will tighten up the throwing arm up which will lead to elbow problems.

Sandpit: One- and two-legged bounding in the sand

Gym: Box jumping. Jumping and hopping on, off and over boxes of different heights

The plain fact is that javelin throwing by itself is too destructive on the body to allow an endless amount of throws. The solution is…drills. They will allow the athlete and the coach to focus on the different elements of the throw from the run-up, to the withdrawal, to the throw without the full strain of hundreds of throws.

Crossover, repeats: Focus on driving up off the left leg, pushing and reaching forward with the right leg. Keep the chest closed and shoulders turned sideways, with eyes looking forward over the left shoulder.

What to do: Never take more than two weeks off from throwing. In the off- season, throw lighter javelins, throw at targets, work on drills at varying intensities, et cetera. Make it fun, but keep throwing. Never stop.

The javelin throw is an elastic, dynamic, explosive throw at the end of an accelerating, horizontal approach. That means you can’t think of – or execute –the run-up and the throw separately. The entire process should be one continuous build-up. The speed of the run-up will affect the speed the athlete can move through the throwing position which in turn will affect the release speed of the javelin which is ultimately what determines distance.

It is one thing to hit great throwing positions at slow speeds, but it is entirely another to hit those same positions at greater speed. There are very few throwers (Nemeth, Petranoff, Zelezney, Backley) that I have seen over the last 30 years that get better positions the more they accelerate. To me all of them start the throw at the beginning of the approach not just at the end. Breaux Greer is the latest athlete I would add to this elite list up until he tore his ACL. The positions he has been hitting last summer have quite frankly been awful, which makes his achievements all the more remarkable. With his leg fixed and his skill for really accelerating into the throw combined with being able to get into and hold the power position throughout the throw, he will be unstoppable.

If a tailwind or headwind is coming at an angle, you may be able to improve your throw, by changing the direction of your approach by 10-15 degrees by running toward the right or left sector line to get a more favorable angle for the wind. For example, if the wind is coming behind you and from the left, you start at the left edge of the runway and run toward the right end of the arc. It may not seem like much, but every inch counts.

Side winds are tricky. When you have a side wind during your workout, experiment and watch what the wind does to your throw. Again, if you are familiar with the wind in all its variations, you’ll be much more confident than your opponents.

Always be conscious of the wind when you practice. Make the wind your friend, and it will help you throw farther than the throwers who don’t know how to handle wind. 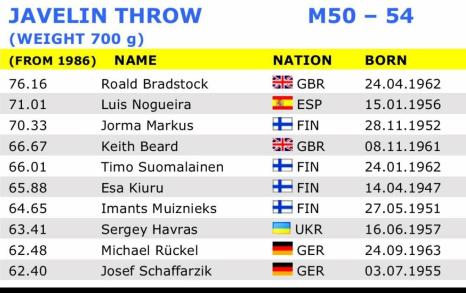 About Bradstock and Bradstock

Roald and Clarissa Bradstock are happily married and raising four daughters. Roald is a well renowned artist, Olympian, who holds the Javelin Masters Record. Clarissa is a successful executive with Any Lab Test Now. Together they will share their thoughts on wellness, aging, careers and balancing work and family.
View all posts by Bradstock and Bradstock →
This entry was posted in Uncategorized. Bookmark the permalink.